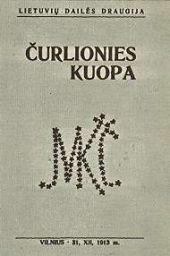 1912 Ciurlionis' symphonic poem "In the Forest" was played for the first time in St. Petersburg.

1912-13 the Second Exhibition of Postimpressionists Art took place in London. Several Ciurlionis' paintings were also exhibited, even though they were clearly distinguished out of the others' works.

1913 the Union of Arts issued a publication called "Ciurlionies kuopa", the main aim of which was to exhibit and popularize the painters' works. 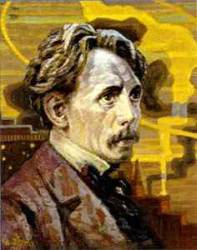 1936 Ciurlionis' symphonic poem "The Sea" was played in Kaunas for the first time ever.

1995 a new occasional 50 lit coin with Ciurlionis' face imprinted on one side of it was issued in Lithuania.

2000 international exhibition "Expo-2000" took place in Hanover (Germany). Lithuania presented a project called "Creation of the World for the End of the XX-th Century". An animation of M.K.Ciurlionis paintings ("Creation of the World" cycle, "Hailing of the Sun", "Rex" and other works) was shown with a phonogram of Giedrius Kuprevicius composition. The project seemed to cause an unexpectedly great interest to visitors so it was repeated in Lithuania, in the Town-Hall Square of Vilnius, celebrating the third millenium.